In my photographic travels, I’ve recently taken a real interest in time lapsing. Having done some research in the area, I’ve found it is relatively easy and inexpensive for an amateur such as myself to produce one. To that end, I thought I’d give a couple of quick tutorials on how to produce a simple timelapse movie that should work on both OS X and Windows.

The above is a time lapse video I made last night from the top floor of my parents house in France. Despite the fact that chunks of it look like day time, it was mostly filmed in the hours from midnight to about 3am. The illumination comes largely from the moon, so the film almost goes black for a section when the cloud cover becomes very heavy.

So the first thing you have to do when producing a timelapse movie is to produce a sequence of images. This can be done in two ways using a Canon SLR (those of you not shooting with a Canon SLR should skip to the second method). The first and cheapest is to use the remote capture software that comes with your camera. Assuming you have installed it on your computer, when you connect your camera, you should be presented with this:

Start the remote capture application and you should be able to remotely change camera settings using this dialog box: 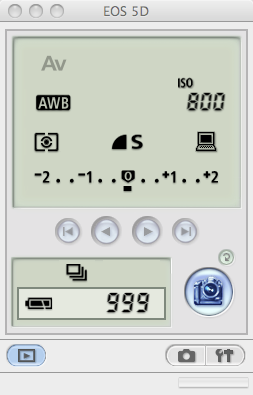 Once you have the correct settings for the scene, you can start a time lapse using the following menu item:

There are, however, problems with using this method to generate your image sequence. Firstly, your camera has to be tethered to your computer. That means you are either limited by a laptop battery, or your computer needs to be plugged into the mains. If you have a desktop, it’s not likely to be very portable. Also, Canon’s software is buggy in my experience, and limits you to batchs of 999 images and a minimum recycle time of 5 seconds.

However, as I mentioned earlier, there is another way of generating an image sequence. You can use a timer, such as the TC-80N3 from Canon. The major problem with this device is that it is very expensive for what it is. Fortunately, eBay is to the rescue, with many cheap and cheerful alternatives available from China. This is mine: 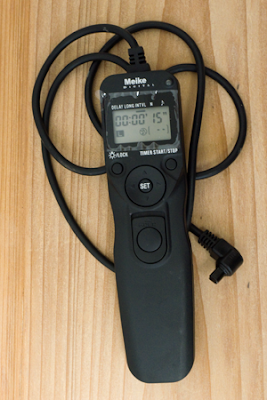 Note: This timer and the TC-80N3 only work with a subset of Canon SLR bodies. Check that the timer you are buying works with your body.

It is possible to buy a timer like this one for most SLR bodies, and it has many advantages. It allows untethered shooting, unlimited batch sizes and image periods as short as 1 second. It also has a host of other features such as controlled long exposures in bulb mode, and delayed exposures.

At this point I should mention a couple of things. There are two factors that will limit the number of images in your image sequence. These are, your battery and your memory card. There are a couple or things you can do to maximise both.

To maximise your battery, turn off image reviewing. This stops the LCD screen on the back of your camera being switched on for every single exposure. You aren’t going to be watching every single one, so it’s just a pointless waste of battery.

To maximise your memory card, switch the image resolution to the smallest JPEG setting you can. Shooting in RAW is pointless, as you’ll have to just convert to JPEG anyway and you aren’t going to tweak the settings for several hundred or thousand images. Shooting in large resolutions is equally silly as noone watches video in 4372 x 2906.

Finally, when choosing your exposure mode, if at all possible, choose manual exposure. If you allow the camera to meter, it will meter on every single shot. Often your camera will not consistently meter between images, and as a result your video will flicker, when you animate your images together. Also, set focus to manual as well, other wise your camera will attempt a focus lock on each exposure. Particularly in dark situations this can cause the camera to miss shots, as it hunts for focus or refuses to expose because it cannot find focus at all.

In my next post I’ll discuss ways to turn your image sequence into a movie, with a soundtrack if desired.